Since 1882, HIAS Pennsylvania and its predecessor organization, the Association for Jewish Immigrants, have exemplified the full meaning of the Jewish value of welcoming the stranger, as well as the American sentiment of sanctuary as engraved inside the Statue of Liberty with the words of Emma Lazarus. Members of Philadelphia’s Jewish community form the Association for the Protection of Jewish Immigrants to assist Eastern European Jews arriving in Philadelphia.

The increase in Jewish immigrants resulted from a wave of pogroms and mass expulsions in the Russian empire that left hundreds of thousands of Jews homeless. Between 1880 and 1924, nearly 2 million Jews from Russian and Eastern Europe sought refuge in the U.S. Under the leadership of Louis Edward Levy, the organization not only helps Jewish immigrants resettle but serves as a platform for his tireless work to combat the growing tide of restrictive immigration legislation.

Levy allied with other agencies, including HIAS New York and the National Liberal Immigration League, to fight restrictive immigration legislation, such as literacy tests, head taxes, and categorization of immigrants as “undesirable” due to geographic/ethnic origin or health status. Despite his efforts, the Literacy Act of 1917 succeeded and was quickly followed by the Immigration Act of 1924, which severely limited immigration through the use of quotas. Philadelphia’s HIAS merges with the local branch of the National Council of Jewish Women to help Holocaust victims resettle. The new organization is incorporated as HIAS and Council Migration Service. As the Cold War progressed, the Stalinist regime often targeted Jews, labeling them as traitors and sending them to labor camps. A small number gained entry to the U.S., but most were not permitted to leave the Soviet Union.  American leaders in the Soviet Jewry Movement traveled to Russia, where they met with “refusniks” to bring attention to their plight. At the federal government’s request, HIAS Pennsylvania begins to resettle refugees from Vietnam, Cambodia, and Laos — its first concerted work with non-Jewish immigrants.

After the Vietnam War, the US government turned to non-profit agencies to provide refugees with temporary housing, case management, loans, and immigration-related services. By the summer of 1982, HIAS Pennsylvania and Jewish Children and Family Services had resettled over 2,000 Southeast Asian refugees. HIAS Pennsylvania, in concert with other Jewish agencies, resettles over 20,000 Jews from Iran and the Soviet Union in Philadelphia.

Iranian Jews fled hostile environment created by the Ayatollah Khomeini regime, while Soviet Jews were finally able to leave after the success of the Soviet Jewry Movement. In 1989, the Lautenberg amendment codified this policy, permitting Jews and Evangelical Christians from the former Soviet Union and Iran to enter as refugees. HIAS Pennsylvania begins the Litigation Project to represent people seeking asylum or other legal status in the US, a major expansion of services beyond family reunification and citizenship.

The Litigation Project became especially important when the Illegal Immigration Reform and Immigrant Responsibility Act (IIRIRA) of 1996 made it much easier for U.S. officials to keep out or deport would-be immigrants.  The Litigation Project was the first in a series of HIAS PA legal programs that grew to include specialized services for domestic violence survivors, victims of crime, survivors of torture, and immigrant youth. In the next decade, HIAS Pennsylvania resettled over 1,250 refugees from all over the world, with the largest numbers coming from Democratic Republic of the Congo, Bhutan, Burma, and Ukraine. This work continues today as a core service of HIAS Pennsylvania. HIAS Pennsylvania remains at the forefront of immigrant issues through direct service, education, and advocacy.

In 2018, HIAS PA served 2,461 new clients from 113 countries.  HIAS Pennsylvania led a coalition to enroll youth in DACA in 2012, fought the Muslim Ban in 2017 and is currently leading the charge to get universal representation for detained immigrants in Pennsylvania.

HIAS Pennsylvania is a completely separate nonprofit from HIAS Inc., the national organization. While the national HIAS works at the international and federal levels, and primarily focuses on refugees, HIAS PA works regionally, and serves both refugees and immigrants.

HIAS PA is a resettlement partner of HIAS Inc. The national HIAS works as an intermediary between the U.S. government and other organizations – including HIAS Pennsylvania – to administer the U.S. Refugee Admissions Program.

HIAS Pennsylvania is a completely separate nonprofit from HIAS Inc., the national organization. While the national HIAS works at the international and federal levels, and primarily focuses on refugees, HIAS PA works regionally, and serves both refugees and immigrants.

HIAS PA is a resettlement partner of HIAS Inc. The national HIAS works as an intermediary between the U.S. government and other organizations – including HIAS Pennsylvania – to administer the U.S. Refugee Admissions Program. 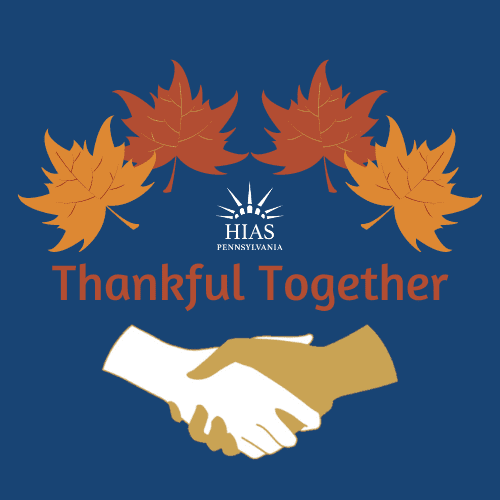